“Our programs always incorporate values formation for the youth. During emergencies, adults may be focused on recovery efforts, but we also need to be mindful of the mental, emotional and psychosocial impact of disasters on our children.” ~Mr. Icko Gonzales, Superbook Project Head 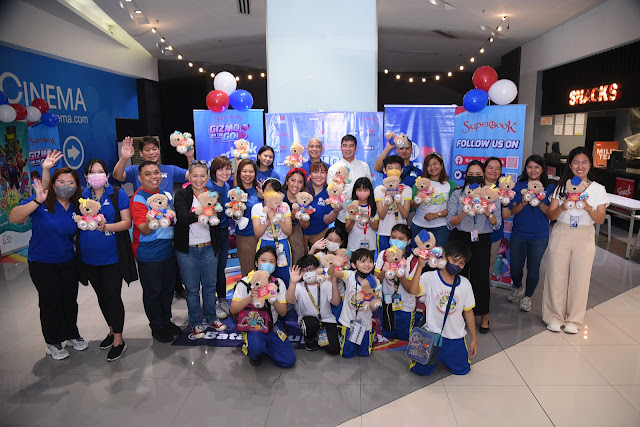 ‘GIZMO on the Go’ interactive event held in celebration of Children’s Month. As a company that strives for advocacies that benefit different sectors of society, SM Cares is committed to implementing programs on disaster preparedness and resilience that are inclusive, creating relevant initiatives not just for women, senior citizens, and persons with disabilities, but also for children and youth.
In line with its Children's Month celebrations this November, SM Cares recently partnered with SMDC Light Mall and the Emmy-nominated animated children's show Superbook for "GIZMO on the Go," with a specially-designed program to teach kids the importance of disaster preparedness in a fun way.
Held last November 17 at the SMDC Light Mall Cinema, "GIZMO on the Go" educated children on common disasters in the Philippines such as earthquakes, volcanic eruptions, and floods, and gave them tips on what to do in times of calamity. More than 150 participants were composed of kids from the Alay Pagasa Foundation, Ilaya Barangka Integrated School, and SMDC Residences. Teachers and guardians also joined the event.

Apart from science-based lessons and survival tips, the program also featured a special viewing of the Superbook episode of Noah's Ark to promote personal resilience among the young viewers.
To further provide comfort to children in uncertain times, SM Bears of Joy were also donated by SM Cares and various SMDC Light Mall tenants.

"At SM Cares, we believe that in order to create a Philippines that is truly disaster resilient, we need to get everyone onboard, and that includes vulnerable sectors such as our children. This is very important especially because these children are most likely the ones who will truly feel the effects of climate change, including the increased frequency of typhoons, by the time they become adults, and we want them to be ready." ~Mr. Royston Cabunag, SM Supermalls AVP for Operations and SM Cares Director for Children & Youth

Aside from these activities, several interactive booths were set up for participants to visit. These featured Superbook online games, an art booth to showcase creativity, and an interactive booth to learn about family, arts, culture, and the environment. The beloved robot, Gizmo, also joined the fun. Meals and treats were made possible through SM Cares, Superbook, Jollibee, Belgian Waffles, EggdropMNL, Smart Driving School and NDZ Corporation.

Through this program, SM Cares supports the United Nations' Sustainable Development Goals (SDGs), particularly "SDG 11: Sustainable Cities and Communities" and "SDG 13: Climate Action." This further aligns with RA No. 10661, which established National Children’s Month instill in the Filipino consciousness our children’s rights to survival, development, protection, and participation.
Other initiatives of SM Cares on children and youth include the long-running Global Youth Summit in partnership with Global Peace Foundation Philippines, the annual SM Bears of Joy initiative, as well as supporting programs with UNICEF Philippines and the Department of Social Welfare and Development.
SM Cares is the corporate social responsibility arm of SM Supermalls, responsible for initiatives that focus on communities and the environment. In addition to its programs on children and youth, SM Cares’ advocacies include programs on women and breastfeeding mothers, environment, PWDs and senior citizens, and the Bike-friendly SM.
To learn more about these programs, visit www.smsupermalls.com/smcares.
Ipinaskil ni Crownless Adds sa 5:48 AM