Cluck Sarap: The New Roast of the Town 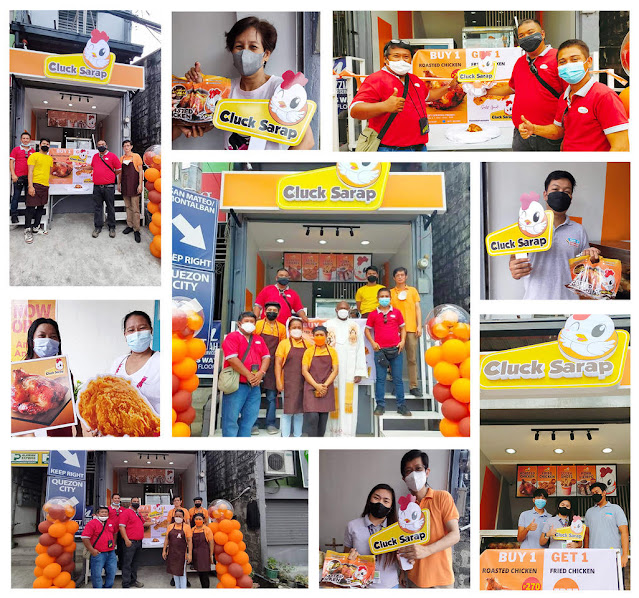 A few weeks ago, a new chicken store named Cluck Sarap opened at Barangay Banaba, San Mateo, Rizal. The store offers one of the tastiest and juiciest value for money roasted chickens in the market today.
Cluck Sarap originated in Iloilo. Its first store in Villa Arevalo, Iloilo City opened four years ago.   It all started with an idea on how to provide Filipinos with freshly cooked, flavorful and reasonably-priced food.  The idea came from a family-owned company engaged in the business of growing broilers. Being one of the biggest poultry producers in the Visayas, the company behind Cluck Sarap thought that it would serve its consumers better if they can offer ready-to-eat products using mostly their own-grown birds.
Since then, Cluck Sarap has expanded to serve most of the municipalities in Iloilo. Currently, it’s one of the fastest growing chicken rotisserie chains in the region. It also has opened branches in other provinces such as Antique, Capiz, Aklan, Negros Occidental, Leyte and Cebu. Most recently, it opened its first store in Luzon, the San Mateo, Rizal branch. To date, Cluck Sarap has grown to a total of 40 branches.
Cluck Sarap is known for its perfectly roasted chicken.  Their classsic roasted chicken is made with quality fresh chicken and natural herbs and spices.  Fresh dressed chickens are marinated before roasting in an oven rotiserrie, where the juiciness of the chicken is preserved. The ideal blend of Cluck’s unique marinate, coupled with natural herbs such as rosemary and lemon grass, yields an aromatic and tasty roasted chicken treat that every family will love.  Truly, Cluck Sarap’s Roasted Chicken is worth the price.  As most Ilonggos would say, “Sulit Gid!”
More Cluck stores are set to open this year in Antique, Guimaras and Cebu.
You may visit their Facebook at https://www.facebook.com/clucksarap.ph/ and Instagram at https://www.instagram.com/clucksarap/.
Ipinaskil ni Crownless Adds sa 9:35 AM