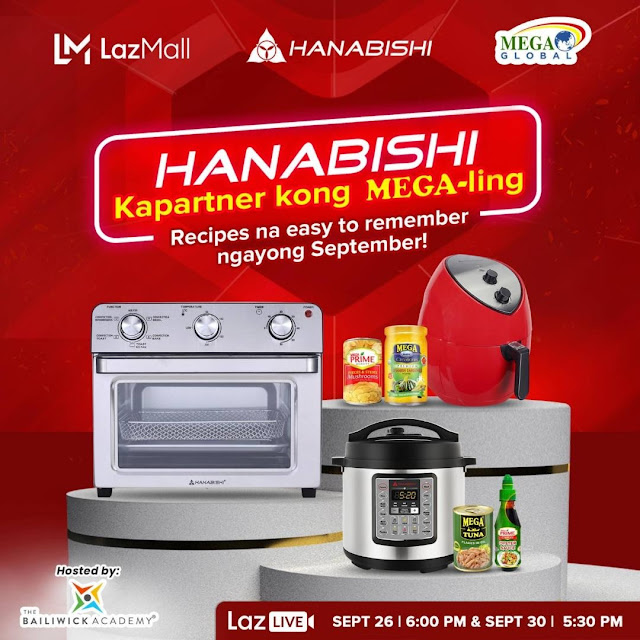 Hanabishi Appliances and Mega Prime Global team up once more for a LazLive cooking demonstration on September 26 at 6:00 PM and September 30 at 5:30 PM. Both events will be live streamed on Hanabishi’s official Facebook account.
Learn how to prepare beef pares using an electric pressure cooker and homemade pizza with an air fryer oven.

“Hanabishi and Mega Prime Global along with The Bailiwick Academy are holding these cooking demonstrations so our audiences can learn how to prepare simple meals using Hanabishi cooking appliances. We made sure that they are easy to follow so that even those who don’t know how to cook and operate basic kitchen appliances can do the dishes at home.” ~Cherish Ong-Chua, Vice President, Finance and Marketing at Hanabishi Appliances

Grace Parazo, CEO of The Bailiwick Academy, added that chefs will be preparing the dishes, they made sure that the cooking procedures are easy to follow.

“It will be a fun and educational event, and we hope we could encourage more people to take up cooking.” ~Grace Parazo, CEO of The Bailiwick Academy

Vouchers and Amazing Deals
All throughout the livestreams, Hanabishi and Mega Prime Global will be giving away discounts and vouchers. Exclusive bundles will also be up for grabs.
Those who will purchase a Hanabishi electric pressure cooker, rice cooker, and fryer during live events will receive free bundles of Mega Prime products.
Products to Be Used During the Cooking Demos
Hanabishi’s electric pressure cooker and air fryers are two of its most popular product lines.
The Hanabishi HDIGPC10in1 that will be used during the event has a 5.7L capacity. It can be used as a pressure cooker, slow cooker, rice cooker, stir fry pan, steamer, yogurt maker, cake maker, warmer, searing pan, and sterilizer.
It has a 10-program cooking selection: rice, multi-grain, soup, meat/stew, poultry, fish, steam beans/chill, yogurt, porridge. It comes with a digital display and an intelligent no-pot sensor.
Hanabishi air fryers, meanwhile, come in two variations: the standard air fryer and the air fryer oven, which comes in two sizes.

“From these simple dishes, we hope more people would be encouraged to cook their own meals at home. Both Hanabishi and Mega Prime are here to help our customers make their cooking easier and healthier.” ~Chris Fernandez, head of marketing at Mega Prime Global Corporation

The Hanabishi HAFRYER70 has a 7-liter capacity and a 1 to 30 minutes cooking time setting. Its cooking temperature ranges from 100 to 200°C. It comes with a non-slip base and an air fryer basket.
The Hanabishi Air Fryer Oven HAFEO23SS, meanwhile, has a 23-liter capacity and adjustable thermostat. It has six functions: air fry, boil, bake, toast, convection broil, and convection bake. It also comes with a rotisserie. It has a pure stainless steel housing, and includes an air fryer basket, baking pan, and oven rack.
For more information about Hanabishi products, visit www.myhanabishi.com. and its official flagship store on LazMall : https://www.lazada.com.ph/shop/hanabishi/.
*For updates on the upcoming cooking demonstration schedules, please follow Hanabishi’s official
Facebook account: https://www.facebook.com/MyHanabishiAppliances. Also follow its
Instagram: https://instagram.com/myhanabishi for the latest product news and promotions.
*For more information about Mega Prime products, visit:
https://megaglobal.com.ph/mega-global-corporation-products/mega-prime/
https://primemomclub.com/
Facebook Page: https://web.facebook.com/MegaPrimeQuality
*For more information on Bailiwick Academy, visit their website and social media pages: www.thebailiwickacademy.com
Facebook : https://www.facebook.com/thebailiwickacademy
IG: https://instagram.com/thebailiwickacademy
About Hanabishi:
Spanning more than three decades, Hanabishi has established its reputation as a provider of affordable yet quality home products that lasts, which paved the way for its tagline “Kapartner from Start to Forever.” Hanabishi Home Appliances are available at leading appliance stores nationwide. For more information about Hanabishi, please visit www.myhanabishi.com/shop/ and like them on Facebook: www.facebook.com/MyHanabishiAppliances/.
Ipinaskil ni Crownless Adds sa 10:28 PM