“I truly believe that if you have that love for the culture, it can work and I really feel it in my gut, hoping that the same heart, passion, and energy will be shared. This won’t be Def Jam Philippines’ success alone but also the whole Pinoy hip-hop and R&B communities, too. I chose to look for raw talents, develop and mold them and have that chemistry and bond with each other until they ‘make it’ and have that superstar status and create monster hits. We look for artists that are creatively genuine, amazingly talented, world-class and have a great character and good working attitude, humble but confident, and can have a long-lasting and fruitful relationship together with our team.” ~Allan Mitchell “Daddy A” Silonga, A&R Senior Manager of Def Jam Philippines

Def Jam, one of hip-hop’s most revered record labels in the world, is set to arrive on Philippine shores with the official launch of its massive Rekognize project featuring its all-star hip-hop roster today, Friday, April 16, 2021.
Rekognize is a historic hip-hop celebration that gathers more than 120+ artists and 14 music producers from the old and new schools of hip-hop for an all-star four-EP series that will roll out this year. The Rekognize project will not only introduce Def Jam Philippines’ young, stellar roster to Pinoy hip-hop fans but also shine the spotlight on the rich and diverse Filipino hip-hop and R&B movements on the global stage. 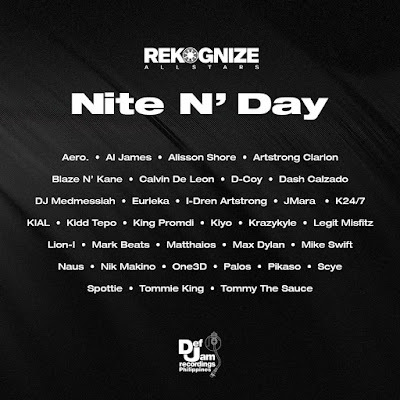 Uniting various members of the Filipino hip-hop community, Rekognize brings not just past and current generations of Pinoy emcees in a sonically monumental event but also through compelling visual narratives. Kicking off Rekognize is the star-studded Nite N’ Day EP, which brings together some of the most exciting names in hip-hop and R&B in the country. Nite N’ Day features lead singles “Beautiful Day” by Mike Swift, D-Coy, Alisson Shore, kiyo, and Mark Beats, which dropped earlier this year and followed by “Atin Ang Gabi” by Al James, Legit Misfitz, K24/7, and Calvin De Leon.
Introducing Def Jam Philippines’ Upcoming Roster
Pinoy fans can expect nothing short of history in the making with Def Jam Philippines’ launch. “It will be huge and again will be centered in cultivating and promoting the hip-hop and R&B culture and community. It's gonna be a celebration of Pinoy pride, heart, and dignity,” Daddy A adds.
The launch of Def Jam Philippines follows the official expansion of Def Jam South East Asia in September 2019, reaffirming its commitment to developing hip-hop communities throughout the region.
Follow Def Jam PH for more updates:
Facebook | Instagram | Twitter | TikTok | YouTube
About Def Jam South East Asia:
Since its game-changing launch, Def Jam SEA has already paid its dues several times over, flexing its musical chops  at high-profile showcases such as 2019’s Culture Cartel convention in Singapore, and helping to usher in global sports  retailer JD Sport’s entry into the Thai market during the brand’s massive launch party in Bangkok.
With hip-hop’s influence spanning the globe, it was only a matter of time before Def Jam slung its brand of dope directly in South East Asia, arguably the most excitingly fresh frontline for new, boundary-pushing music. The label has also  been busy bringing in more stellar talent from across the region into its fold, adding Abubakarxli of Malaysia, Indonesia’s  Ben Utomo and Rayi Putra, and welcoming Vietnam and the Philippines to the family, represented by the likes of  SeaChains and VVS Collective, respectively.
Ipinaskil ni Crownless Adds sa 4:03 AM