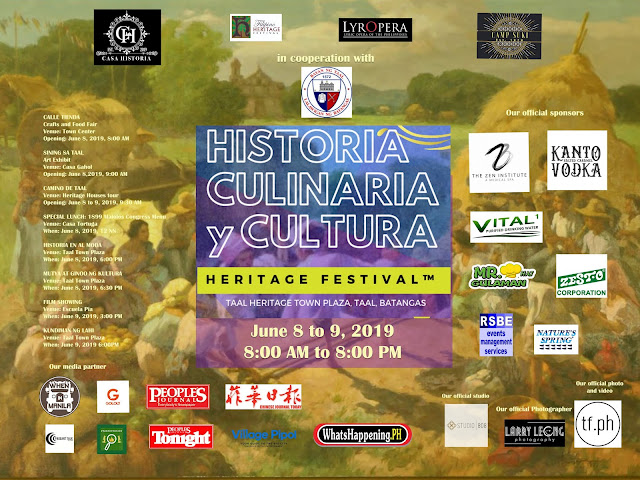 Indeed it's more fun in the Philippines because we have a lot of different celebrations that introduces what Filipinos are good and fun with. One of which is the upcoming Historia Culinaria y Cultura happening on June 8, 2019, a 2-day festival celebrates 121 years of Philippine Independence through a showcase of heritage food, fashion, and culture in Taal Heritage Town, Taal, Batangas.

Experience a celebration of Philippine Independence Day like no other. The Historia aspect aims to educate visitors on interesting and little known facts about Philippine significant segments in Philippine history, particularly on the aspects of art and architecture. There will be talks by experts on Philippine History Art and Architecture, and guided tours to historical places in Taal—especially the houses of illustrious Filipino families that have helped achieve Filipino nationhood.

There will also be Film Showings featuring momentous period films that showcase the skill and soul of noted Filipino filmmakers. Apart from that, amateur and professional photographers will display their snapshots of Taal’s historical places in a 2-day Photo Contest.

Culinaria Filipina will be highlighted during the Pop Up Lunch. Here the Malolos Congress menu will be recreated and served in one of Taal’s ancestral house where the attendees will be required to put on a full period costume.

Calle Tienda, on the other hand, is a 2-day food fair (from June 8 to 9) to be held at Taal’s Social Plaza featuring local and fusion Filipino delicacies. On Calle Jose Diokno, topnotch Filipino culinary artists will conduct food demos on popular Filipino delicacies, traditional cuisine, and long-lost heritage menus.

Cultura, the distinctive Filipino culture which marries Western and Eastern influences into one fluid and vibrant way of life, becomes the inspiration of 3 centerpiece events. The “Mutya at Ginoo ng Kultura”, is the first ever search for the male and female ambassadors who embody Filipino cultural ideals and promote heritage tourism by advocating the preservation and conservation of local culture.

In cooperation with the Lyric Opera of the Philippines or LyrOpera, “Kundiman ng Lahi”, on the other hand, is a concert of well-loved Filipino music that highlights the different aspects of the Filipino psyche.

As a fitting finale, the grand “Historia en La Moda” is a fashion exposition gala that traces the evolution of traditional Filipino attire from pre-Hispanic times to the genteel days of the pre-war era. “Historia en la Moda” will see the masterful creations of Manila’s top fashion designers as they capture the transformations of the Philippine traditional wear.

These events will happen on June 8 and 9, 6:00 pm, at the Taal Social Plaza in Calle Mariño-Agoncillo, Taal Heritage Town, Taal, Batangas.

“HISTORIA, CULINARIA, Y CULTURA” is one of the advocacy programs of CASA HISTORIA, a group spearheaded by acclaimed designer Lito Perez and includes members from different professions and endeavors who share a passion for Filipino arts, culture, and history.

Perez started the daring initiative to help preserve architectural legacies—an integral part of the rich tapestry of Filipino cultural heritage—in danger of being torn down. In Perez’s vision, past clutches hands with the present to assure the survival of these architectural gems by giving them a significant purpose in the contemporary setting without compromising their integrity and soul. This strategy assures the structures’ continued existence while re-purposing it for a new function and pumping new life into these ancestral mansions.

In the past couple of years, Casa Historia has preserved and maintained houses like:


Perez has also served as a consultant for the restoration of:


Currently in the process is one of the oldest houses in the Philippines: