“Asia’s Got Talent is the only series in the world that can unite such a culturally diverse region in a celebration of performing arts. We set out to discover the most inspiring talent of any age and with any dream, and we got all that and so much more. We were also struck by the richness of the personal stories that emerged during the auditions. Everyone has a story, and while the journeys may differ, the big dream remains the same. AXN is the home of original productions and Asia’s Got Talent continues our commitment to deliver premium content that engages and captivates our viewers with edge-of-your seat entertainment.” ~Virginia Lim, Senior Vice President and Head of Content, Production and Marketing, Sony Pictures Television Networks, Asia. 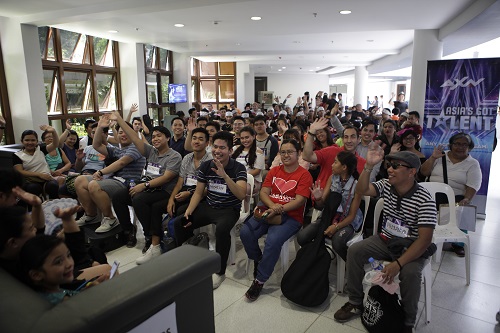 PHILIPPINES (June 19, 2017) Head spinning, death-defying, magical and breath-taking: aspiring stars emerged from all corners of Asia in May as AXN’s producers embarked on their search to discover the next generation of super stars for Asia’s Got Talent.

The record-breaking series returns to AXN later this year, entertaining viewers with 10 episodes comprising five judges’ auditions, three semi-finals, the finale and the results show where the winner will be revealed.

In the Singapore leg, one troupe of Malaysian acrobats queued from 4am; while in Manila, a father and son travelled overland for eight hours to perform a duet. Performers auditioned in the hope of winning the prize to help with family medical bills; while others, who came along as a support, decided to spontaneously audition on the spot.

Talented hopefuls could also apply via an online audition at AXN-Asia.com with some electing to do both to ensure maximum visibility in front of AXN’s producers.

The leading entertainment giant held open auditions in six major cities including Singapore, Kuala Lumpur, the Philippines, Bangkok, Taipei and Jakarta. Over 5000 performers attended the auditions for their chance to take the spotlight on the world’s biggest talent show and for a shot at the grand prize of USD100,000 in cash.

New Ratings Records in Asia
Season one of Asia’s Got Talent set new ratings records for the English general entertainment (GE) genre during its run, taking AXN to the number one spot in its timeslot among all regional pay-TV channels collectively across Southeast Asia and Taiwan.

Got Talent Globally
The Got Talent franchise was created by Simon Cowell’s Syco Entertainment and is co-produced and owned by Syco Entertainment and FremantleMedia. It is entered in the Guinness World Records as the Most Successful Reality Television Format in history with 70 local versions produced across Europe, Asia Pacific, the Middle-East, Africa and the Americas. Around the world, the Got Talent format airs in a total of 186 countries.

About AXN
AXN is Asia’s leading general entertainment channel featuring exclusive top-rated drama series, blockbuster features, reality programs and ground-breaking original productions. The channel appeals to a discerning audience seeking content that is smart, intriguing and unexpected, all delivered close to U.S telecasts. From The Blacklist and Quantico, to MacGyver and The Amazing Race Asia, AXN is defined not by a genre, but by an attitude that truly redefines action.